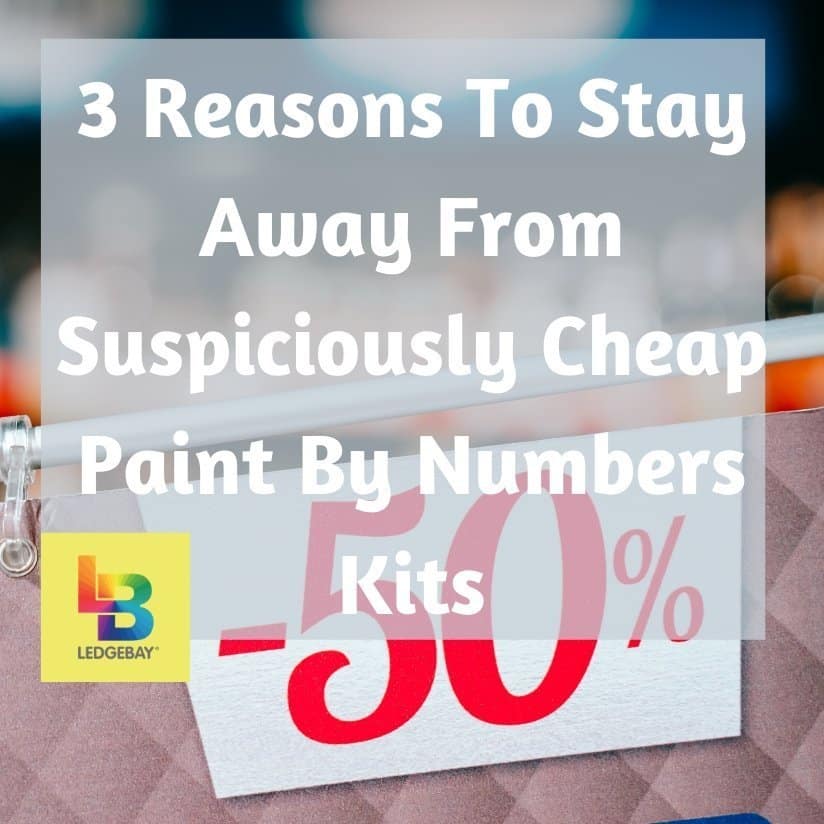 A cheap paint by numbers kit will cause you a ton of undeserved stress.

In case you didn’t already know this, painting by numbers is a therapeutic, stress-relieving from of art. That is, if you use a high-quality kit like the ones that you’ll find from Ledgebay. Every time your hand places paint on the canvas, your mind joyfully indulges in the art, easing away any built-up worries and anxieties.

The only thing that can come in the way of your relaxation is a cheaply-made paint by numbers kit. It won’t allow you to simply enjoy the process of creating art. Instead, you’ll spend a bulk of your time removing creases from the canvas, dealing with low-quality paints, trying to fix fraying brushes and many other unpleasant things.  Lastly, you will likely have to wait 4 to 6 weeks to even receive the cheap kits because most of them are drop-shipped from China.

Art sets, including painting by numbers kits, should not come with such issues. They should be made with the highest standard. That way you’ll be able to unleash your creative side without any interruptions.

What I’ve said is a mere highlight reel. Here are my top 3 reasons why you should stay away from cheap paint by numbers kits.

You will get low-quality materials

Nothing messes with creativity and artistry as much as poorly made materials. Unfortunately, that’s exactly what you’ll get if you buy a cheap paint by numbers kit. “What are these materials?” You ask.

Just an FYI, canvas is actually one of the materials used to make painting surfaces. It can either be a cotton or linen canvas – both are equally good, especially with acrylic or oil paints. Watercolor paint goes well with watercolor paper.

Now, not all surfaces are made equal. They may have the same material but staggering differences in quality. A poorly-made surface will not last as long as you need it to. In fact, if you poke it even just slightly with a paint brush or finger, chances are it will rip.

Besides, most of these cheap surfaces have loose weaves and super thin warps. Lift it up to some light and you’ll see through it. That’s not a good thing; high-quality surfaces are usually opaque.

Another common problem with cheap paint by numbers kits is that you might get a pretty decent design to paint, but with some numbers missing from the canvas. In that case you’ll not know which color to apply in some spots. And – you guessed it – the final painting will look nothing like the photo included in the kit.

Lastly, You will likely receive a FOLDED canvas.  This is due to the cheaper shipping price from a smaller package.  The majority (ALL) drop-shippers do not care about customer service, they just want to make a profit.

More often than not, a cheap paint by numbers kit will come with a poorly constructed paint. There are very particular ways of making oil, acrylic and watercolor paints.

But because cheap manufacturers want to make more money at your expense, they won’t follow the standards. That always results in annoying problems. For one, the paint will show through.

The numbers on the surface will not be visible if you use a good quality kit. It doesn’t matter if it’s a light color like white or yellow, the paint will cover the numbers to your satisfaction.

You can’t say the same for a cheap paint by numbers kit. People will clearly see the numbers peeking through light-colored paint. Because of that, you’ll have to wait until the painting is completely dry, then repaint any spot where a number appears.

That’s just a waste of time and paint. Speaking of which, it’s very common for cheap paint by numbers kits to come with insufficient paint.

Picture this: you’re sitting there in your art corner enjoying the pleasure of painting by numbers and at the peak of your creativity, get this, you run out of paint before completing the artwork.

That is just the worst thing that can happen to an artist. Especially since it’s the job of the kit maker to ensure that there’s enough paint in the set. You should not be in a position where you have to buy extra paint. If anything, your kit should have more paint than you need. Here are some more details on what a good paint by numbers kit should look like.

The biggest problem with cheap paint by numbers brushes is that they fray. At best you won’t be able to paint within the lines and at worst the brush will ruin your surface. The only way around this annoying problem is digging in your pocket (again) to buy new paint brushes.

Something else that’s synonymous with cheap paint by numbers kits is a lack of proper brushes. A typical paint by numbers design has small as well as large spots to paint. The extremely small ones require equally small brushes so that you don’t paint outside the lines.

Unfortunately, people who sell cheap kits don’t put that into consideration. They’ll throw in large brushes that you can’t use on small designs. It’ll be up to you to figure out how to get the small brushes that you need. Needless to say, that will be another dent in your pocket.

You will get a poorly packaged kit with poor instructions

When it comes to packaging, the biggest concern is always the surface; which in most cases is a canvas. It may be a strong material but canvas is prone to damage when packaged incorrectly.

For example, if you fold it, it will get permanent wrinkles. Of all the things that can happen to a canvas, wrinkles are among the worst. They make the surface unsightly and hard to paint on. If somehow you manage to complete the artwork, the wrinkles will possibly grab a viewer’s attention more than the artwork itself.

Most cheap paint by numbers kits come with folded canvases and surprise, surprise, they’re always wrinkled. Some people will give you all sorts of guides on how to get wrinkles out of paint by numbers canvas. But if the canvas is poorly made, the creases won’t go away even after months of stretching, ironing, placing books on it, and what have you.

So, what should you do to avoid the issue of a wrinkled canvas? Buy a good kit that’s packaged well. The best way to package a canvas for transportation or delivery is to roll it around a tube. Doing that avoids folding the canvas and therefore saves it from wrinkles and creases.

In case you already ordered your paint by numbers kit and it came folded, you can read this for a few tips on how to flatten a canvas.

As long as we’re talking about packaging, it’s very common for cheap paint by numbers kits to come with missing items. You’ll place your order and have the kit delivered. You’ll feel really excited to start painting, so you’ll open the package immediately and start unpacking the contents.

Oh wait, brushes were not included. There are only 7 paints instead of the 10 that were advertised in the product specs. The seller said you’d get hooks to hang the artwork, but the package has none.

That’s a whole new level of disappointment that you don’t want to experience. To make matters worse, almost every cheap paint by numbers kit has poorly-worded instructions. In some cases, there are no instructions at all.

No matter how experienced you are in painting by numbers, you’ll always need an instruction booklet/sheet. That’s where the manufacturer explains that “if you see a shape with two numbers, it means that you have to mix two colors”. Or something like “don’t dip a brush in two different paint containers before washing it because you’ll contaminate the paint”.

They may seem obvious but we always need a reminder. It’s in that moment of excitement that some of these tips and precautions disappear from the back of our minds. And that’s where an instruction booklet becomes our hero/heroine.

This is a very big deal because you’re buying the kit with the aim of reproducing the photo in it. It’s always disappointing when the final artwork doesn’t look anything like the photo used to advertise the kit despite your very best efforts. This always happens for many reasons.

Such (seemingly) small mismatches can make a huge difference between the photo and final artwork. Yet they are very common in cheap paint by numbers kits. At times the photo included is entirely different from the design. It’s only after you’ve finished painting that you realize it’s not the same picture.

The second thing that can cause a mismatch between photo and final painting is the quality of paints. Poorly constructed paints are largely problematic. They either dry shiny or shift (change color after drying). Whatever the case, the final painting will not have the same colors as the included photo.

For instance, red color can shift to orange, blue to a whitish hue, and dark green to light green. Ultimately you’ll be left with a painting that has the worst color combination you could ever imagine.

The thing is, we always choose paint by numbers kits based on the photo. So if we can’t reproduce it, it’s a fail. It would be tolerable to fail because you didn’t do one or two things correctly but not because the manufacturer sold you a sub-standard kit.

As long as we’re talking about paint by numbers photos, knowing how to pick a picture that will create an awesome painting is a skill on its own. It never hurts to research thoroughly before settling on an image. And whatever you do, don’t go for the cheap paint by numbers kits because most likely the image won’t be the same as the painting.

Are you feeling ready to create your next paint by numbers artwork? Great! Stay away from the suspiciously cheap stuff and you’ll pull off a masterpiece. If you’re not sure where to start, this step-by-step guide on how to paint by numbers might help. 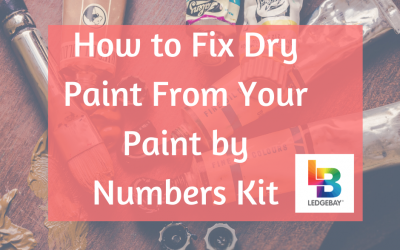 How to Fix Dry Paint From Your Paint by Numbers Kit 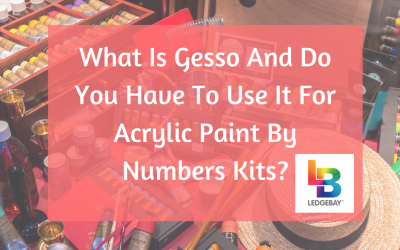 What Is Gesso And Do You Have To Use It For Acrylic Paint By Numbers Kits? 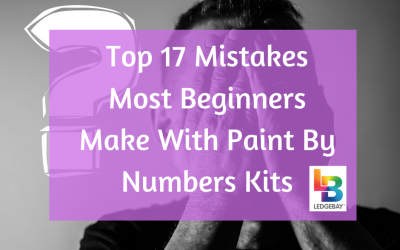 Top 17 Mistakes Most Beginners Make With Paint By Numbers Kits 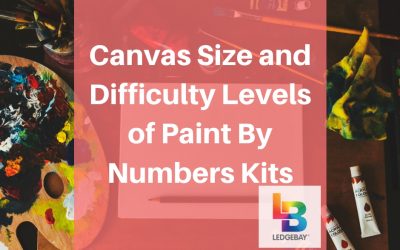 Canvas Size and Difficulty Levels of Paint By Numbers Kits 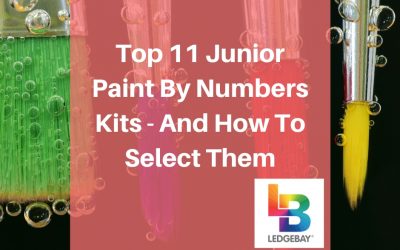