Do you love Vincent Van Gogh paintings list? If so, you’ll love this list of all his famous paintings! This post includes a complete list of Van Gogh’s work, as well as information about each artworks. Van Gogh is one of the most famous painters in history, and his work is loved by millions of people.

If you’re interested in art, or if you’re just a fan of Van Gogh’s work, then you need to read this post!

Who Is Vincent Willem Van Gogh?

Most people think Van Gogh is the best painter after Rembrandt and one of the best Post-Impressionists. The strong colors, bold brushwork, and curved shapes in his work had a big impact on the Expressionism movement in modern art.

After Van Gogh died, his art became incredibly popular, especially in the late 20th century, when it sold for record-breaking amounts at auctions around the world and was shown in blockbuster touring shows.

Van Gogh was sure that in order to be a great painter, you had to learn how to draw well first. Van Gogh got better at drawing over time, and he started to use more color.

Over time, the bold use of color in Van Gogh’s paintings became one of the things that people remember most about them. Van Gogh likes working on natural beauty, facial expressions and self portraits. Both Van Gogh worked like landscapes and his still life paintings show this.

Why Is It Well Known?

The Starry Night is probably the first famous painting that Vincent Van Gogh painted that comes to your mind when you ask someone to name Van Gogh’s most famous works. It’s on different artworks such as posters, funny socks, tote bags, computer backgrounds, tattooed arms, and just about everything else.

The Starry Night is not only one of Van Gogh’s most famous paintings, but also one of the most famous pieces of art ever made.

Van Gogh’s Starry night is also hanging on the walls of New York’s Museum of Modern Art, where it’s one of the most eye-catching paintings of Vincent Willem Van Gogh .

The painting is thought to be one of the best in western art, and it is certainly Vincent Van Gogh’s most well-known piece.

Even though this article is all about renowned Van Gogh paintings and not a biography of the artist, you can’t talk about his art without talking about his life.

In 1889, Van Gogh checked himself into a mental hospital in Saint-Rémy-de-Provence. This was a few months after he cut off his left ear, which became a famous event. The view from his window at the asylum inspired this artworks.

Some art critics think that the painting was made while the artist was upset. This is supported by the fact that Van Gogh had a second mental breakdown only a month after he finished The Starry Night.

Thought It Was A Failed Experiment

Even though it is now considered one of the most valuable paintings in history, Van Gogh seems to have thought of this paint as a failed experiment.

It wasn’t called a “night study” until a letter to Van Gogh’s brother Theo several months after it was painted. Later, he decided not to send the painting to the Netherlands because he liked other works much more.

Why Is Vincent Van Gogh Starry Night Over the Rhone Painting Well-known?

Most of the time, when people say “Starry Night,” they mean the first painting on this list, but they could also mean this famous painting “Starry Night Over the Rhône.”

This painting is also striking in how it shows a night sky, but it has fewer spirals and a more peaceful feel than the other one. It also uses the classic color palette for which Van Gogh would become famous.

Vincent Van Gogh seemed to be especially taken with the night sky and the gas lights in Arles that could be seen across the water. He was so excited about the painting that he sent a sketch of it to his friend Eugène Boch, who was also a painter. In 1889, the painting was shown to the public at the Société des Artistes Indépendants in Paris.

In one of the many letters he wrote to his brother Theo, he talked about the painting in almost loving detail.

Where Is Starry Night Over the Rhone?

Why Is This Painting So Well-known?

Van Gogh’s Irises are probably the best example of how beautiful the paintings of Van Gogh are. The painting is full of light, life, and natural beauty, and it has a little bit of a Japanese art feel, like Almond Blossoms. To put it simply, it’s beautiful to look at and full of color.

“It catches the eye from a distance. The Irises is a beautiful painting that is full of life and air.” – Van Gogh, Theo. 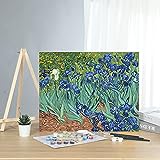 Van Gogh started this painting almost as soon as he checked himself into a mental hospital because his mental health was getting worse. He said that painting was “the lightning conductor for my illness,” and he put all of himself into his work by painting pictures of the flower garden at the Saint Paul-de-Mausole Asylum, lliet.

Three of Van Gogh’s paintings are all called “Wheatfield with Cypresses,” and they are all indeed very similar in how they are put together. This is the first of the three paintings, and it was finished in July 1889.

Van Gogh liked cypress trees and wheat fields, so he thought this was one of his best landscape paintings. He then made two more works that were similar.

The Metropolitan Museum of Art in New York City has the painting you see above.

Why Are These Paintings Well-known?

Sunflowers isn’t just one painting; it’s actually two sets of paintings that all feature it. Most of the time, when people talk about Van Gogh’s “Sunflowers,” they mean the series he made while he was in Arles, which has four different versions of the same idea and three more.

Les “Paris Sunflowers,” which he made while he and his brother lived in Paris from 1886 to 1888, are less well-known. You can see them at museums like The Met in New York, the Kröller Müller Museum, and, of course, the Van Gogh Museum in Amsterdam.

Theo Van Gogh himself seems to have loved sunflowers very much. This is indeed, clear from the number of sunflower paintings he made and the way he talked about them in letters to his brother and other people.

In 1888, Theo Van Gogh wrote, “I’m painting with the enthusiasm of a Marseillais eating bouillabaisse.” This doesn’t come as a surprise when you consider that he was painting big sunflowers.

He loved painting sunflowers, and everyone knew it. Furthermore, he would say that it was his dream to work in a studio with his friend Paul Gauguin and that he wanted to decorate the walls with big paintings of them.

Where Are The Sunflowers Van Gogh Painted?

The Met in New York, the Kroller-Müller Museum in Otterlo, the Van Gogh Museum in Amsterdam, the Museum of Fine Arts in Bern, and in the National Gallery in London. 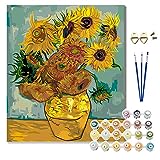 Self Portrait with Bandaged Ear

Vincent Van Gogh is known for self-portrait. During his life, he painted more than 30 self-portraits of himself. The story behind this one is well-known. After an argument with another famous painter of the time, Paul Gauguin, Van Gogh used a razor to cut off part of his left ear.

Why Is It Well-known?

Vincent then went to a brothel and told a prostitute named Rachel to “protect this object with your life.” This is one of the two paintings the artist Vincent did of himself after the event. Take note that the bandage is on his left ear. It looks right because Van Gogh used a mirror to paint the picture.

The Story Behind It

The story behind this later work is mostly about Van Gogh’s own life especially when it comes to his mental illness. In a letter to his brother Theo, where Vincent talks about this self-portrait with bandaged ears, he says that he’s in a better place now, but looking back, it’s painfully clear that things were not going well with Vincent.

“I hope you will notice that my facial expressions have become much calmer, although my eyes have the same insecure look as before, or so it appears to me.”

This was Van Gogh’s first big painting. He wanted to make the peasants look as real as possible. So he chose rough models for the work that would make it look like “these hands they are putting in the dish” had “tilled the earth themselves.”

After two years and many paintings, Van Gogh still thought The Potato Eaters was his best work. Vincent wrote to his sister, “What I think about my own work is that the artworks of the peasants eating potatoes that I did in Nuenen is after all the best thing I did”.

Vincent Van Gogh’s Bedroom in Arles is a well-known oil canvas artworks by the Dutch artist Van Gogh. Also, it is painted in 1889 and follows a post-impressionist style.

This was the room in Arles that Vincent Van Gogh shared with Gauguin in “The Yellow House.” Indeed, Gauguin slept in the spare bedroom, which was behind the closed door on the left. Vincent wrote to a friend that the first painting in this series came about because he was sick for a long time. According to the artist he lived and rested in a wooden bed for several days.

If you’re looking for some beautiful and unique paintings to enhance your home, then consider purchasing a van Gogh. Indeed, his works are sure to impress guests and brighten up any room. Not only are they aesthetically pleasing, but they also come with a rich history and story behind them.