Paintings: 14 Famous Artworks and The Interesting Stories behind Skip to content

Paintings can be beautiful, breathtaking, and moving pieces of art. But do you know the interesting stories behind some of the world’s most famous paintings?

These paintings range from those displayed at the national gallery in London to those that are now part of the collections of very wealthy people from the 13th to the 20th century.

From Van Gogh’s tragic story to da Vinci’s hidden message, these are some tales that you won’t want to miss! So grab a cup of coffee and join us as we take a closer look at some famous paintings and their intriguing backstories.

When most people think of Vincent Van Gogh, they think of his paintings. But there’s more to the story behind Van Gogh’s most famous oil painting, Starry Night.

Van Gogh didn’t just paint what he saw in front of him – he also drew inspiration from his imagination and from the world around him. But according to some experts, a volcanic eruption that took place in Indonesia in 1883 may have also inspired Van Gogh .

The eruption was so powerful that it sent a plume of ash high into the atmosphere, where it was visible from Europe.

According to one popular theory, the Mona Lisa was a portrait of Lisa Gherardini, the wife of a Florentine merchant named Francesco del Giocondo. However, there is no concrete evidence to support this claim.

Another theory suggests that the painting was actually a self-portrait of Leonardo da Vinci himself, disguised as a woman. Whatever the true story may be, the Mona Lisa remains one of the most enigmatic oil paintings of all time.

Few paintings are as iconic as Leonardo da Vinci’s The Last Supper. This masterpiece depicts the moment when Jesus Christ announces that one of his apostles will betray him.

The painting is renowned for its use of light and shadow to create a sense of drama, as well as Leonardo’s skillful use of perspective. In fact, the painting is so lifelike that some scholars believe that Leonardo may have used real people as models for his figures.

Girl with a Pearl Earring is one of Johannes Vermeer’s most famous paintings, and it has inspired paintings, novels, and films.

The Girl with a Pearl Earring has been the subject of much speculation, and the backstory of the painting is just as intriguing as the artwork itself. The pearl earrings are thought to be an allusion to Virgin Mary. 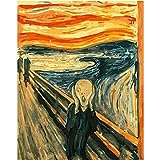 Munch painted The Scream in 1893, at a time when he was struggling with mental health issues. He later explained that the painting was inspired by a day when he was walking through Oslo and felt “overcome by exhaustion and anxiety.”

The bright colors in the painting are meant to convey the intense emotions he was feeling at the time. In many ways, The Scream is a representation of Munch’s own inner turmoil.

The painting is a celebration of the heroism of the revolutionaries, who risked their lives for the cause of liberty. However, it also contains a subtle criticism of the violence of the Revolution, with its scenes of death and destruction.

Nevertheless, the overall effect is one of triumph, and the painting has come to be seen as an enduring symbol of France’s struggle for freedom.

The painting has been interpreted as a criticism of the hardworking lifestyle of rural Americans. Grant Wood, the artist, was actually quite fond of the Midwest and its residents.

The painting’s success is a testament to Wood’s skill as an artist, and it continues to hold a place in the American imagination. The American Gothic is one of the most famous American paintings in the world.

Rembrandt Van Rijn’s The Storm on the Sea of Galilee

The Amsterdam city council commissioned the painting in 1633. They chose Rembrandt because they believed he was the best painter of his generation. However, Rembrandt quickly ran into trouble with the commission.

He didn’t want to simply paint a Bible scene, he wanted to make a work of art that would rival paintings by the great Italian masters. Rembrandt eventually completed the painting, but the city council did not receive it well .

The painting depicts George Washington leading his troops across the Delaware River on the night of December 25, 1776. Today, the painting hangs in the Metropolitan Museum of Art in New York City, where it is one of the most popular attractions.

The painting shows a young woman with an enigmatic expression, her hair cascading down her shoulders. She holds a sprig of juniper, a symbol of chastity.

The shapes in “Ginevra de’ Benci” are no accident – they create a sense of balance and harmony. Additionally, the painting is full of symbols that would have been meaningful to da Vinci’s contemporaries.

The juniper, for example, was a common symbol of chastity.

It was at the South of France in 1888 that he painted his first watercolors Sunflower painting, one of the most famous still lifes art. The beauty of the flower captivated Vincent. He went on to paint several more versions over the course of his stay in Arles.

Vincent Van Gogh’s Sunflower is displayed at the national gallery along with many other famous original paintings by his contemporary artists.

Salvador Dali’s The Persistence of Memory

Salvador Dali’s The Persistence of Memory is a good example of surrealism. While the meaning of the painting is open to interpretation, Dali himself once said that a dream he had in which he saw “the softness of things” inspired it

The idea of time being fluid and changeable is a recurring theme in Dali’s work, and it’s clear that The Persistence of Memory is one of his most successful attempts to capture this elusive concept.

Most people know Claude Monet as the father of the French Impressionism style, but what they may not know is the story behind his most famous painting, Impression, Sunrise. The painting was completed in 1872 and depicts the port of Le Havre in France.

Monet was living in Le Havre at the time, and often painted scenes of the harbor. When he finished the painting, he showed it to a group of friends.

They were unimpressed and one of them even said it looked like an “impression” – hence the name of the painting.

Freud actually based the painting on a real-life incident. He was friends with a man named David Dawson, who worked as his assistant. One day, Dawson came to work naked – apparently he’d forgotten to put any clothes on that morning!

The image struck Freud that he asked Dawson if he could paint him. Dawson agreed, and the resulting painting is Naked Man with Rat.

The Smithsonian American Art Museum and National Gallery of Art

You can browse through many paintings that are world famous in museums such as the national gallery located in London and the museum of the Smithsonian American art.

The Smithsonian and the national gallery is open daily.

Visit a gallery such as what these museums have to discover a collection of wonderful art from incredible artists.

Leonardo and His Contemporary Artists

You can browse through and discover plenty of original paintings and artworks by the likes of Leonardo da Vinci and his contemporary artists at the museums mentioned.

These galleries provide us modern humans with an incredible collection of paintings from olden day artists. Their art can enable us to reflect and feel something. This is something not any artist can do. The gallery makes a lot of people drawn to the site

The exhibitions and collections are open to the public. If you are in love with some of the paintings we shared with you in this article, you can search and purchase prints or photographs of them for sale on the internet.

You can purchase them for yourself or as a gift to someone who also loves paintings of expressionism. Or, those from collections of very talented and famous artists from the past. Online, you might even perhaps find special offers that present themselves to you.

Where Can You Purchase Prints of the Famous Paintings?

If you love paintings from the 20th century, you can buy prints from an online store. You can do a search on Google and look for a page that sells the prints. People buy the prints as something to hang on a wall or as a gift.

They would look lovely on the wall of your home. Compared to one without art or any paintings, it’s a stark contrast. If you’re lucky on your search, you could find some paintings or collection on sale.

If you search well enough, you might even find an artist selling oil paintings and many other collection by an artist on sale.

You might be the next Leonardo Da Vinci of our time and have your own space in the national gallery. If you want to start having your own modern collection of artworks, grab a canvas or any type of paper. Choose the medium or media and style you’d want to be a master of.

You can practice one style at a time. Still lifes, expressionism, and more. There are a lot of art styles to discover and explore. Study the artists in history, such as the artists from the 20th century. Study their art as their art collection is a great study.

Know the many different genres and the category you’d want to fall under. Don’t forget about us when you start doing your own art exhibition and become part of different galleries.