Painting by numbers has been one of the perfect gifts since the 1950s. Almost everyone in the United States has either painted, gifted, or received one of these kits, but do you know how paint by numbers came to be? 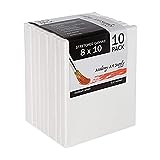 Painting by numbers can be traced back to the early to mid-1950s. This is when the first painting kit hit the market and soon became a lasting arts and crafts trend.

The creator of the adult painting by numbers was Dan Robbins. He was a painter that was employed by Palmer Paint Company. Palmer Paint Co. was a small art company in Detroit that employed a handful of people. Not long after he started the owner of Palmer Paint Co. gave him a task, to sell more paint.

Robbins researched artists and stumbled upon Leonardo da Vinci’s technique of training students. Da Vinci would teach his apprentices to paint by using number patterns and shapes on a canvas. These patterns would indicate what color paint should be placed in each section of the canvas and eventually train the apprentices on the importance of colors and give them an introduction to painting.

The technique was an interesting idea to Robbins, so interesting that he decided to sell more paint for the company by creating a kit similar to Da Vinci’s technique.

This kit would be tailored to sell to the general public and help to bring painting to the masses. After deciding that this was the way to go, Robbins then set out to create the first paint by numbers kit that could be used by anyone of any age.

The First Painting by Numbers Kit Is Created

To create the paint by numbers kits Robbins first painted an original piece to serve as a blueprint. After the painting was finished he would place a plastic drape over the canvas and begin to outline shapes for each shade and color.

Soon after mapping out the painting Robbins would give each specific color a number. This number served as a key to indicate what colored paint belonged in what shape.

After a few trials and errors, Robbins created the first paint by number kit. The kits were first released in the United States after WWII when the American people had more time to do leisure activities.

Having the kits hit the mainstream market wasn’t as easy as it sounds. After pitching the kit to retailers there was some hesitation.

Stores thought that the concepts weren’t easy to understand. They then concluded that if consumers couldn’t find the kits easy to use they would never sell, putting the retailers out of money.

After trying to get someone to buy the kits, S.S. Kresge (which would later be known as Kmart) took a chance on Robbin’s kit. The kits hit the shelves and were marketed to consumers as making “every man a Rembrandt.”

This seemed to be a light at the end of the tunnel, but there was a packaging mix up that caused the paints between two different scenes to be swapped. This led to abstract art that no one wanted and consumers began to demand refunds.

A Second Chance for Robbin’s Painting By Numbers Creation

Palmer Paint Co. knew that if they wanted the kits to be successful they had to act fast. The company approached Macy’s and asked them to sell the kits and let there be in-store demonstrations. They even threw in the sweet deal of letting the store return any kits that didn’t sell free of charge. Macy’s didn’t see this as a losing game so they agreed to sell the kits and let Palmer Paint Co. demo in their stores.

The Marketing Scheme That Started a Nationwide Trend

Palmer Paint Co. went onto hire two representatives that would help promote paint by numbers kits. Each rep was given $250 to give out to friends, family, and acquaintances. They were to give $2.50 to each person they could so they would buy the paint sets without spending their own money.

The reps gave out their money and soon after people were flocking to the stores to buy their ‘free’ paint by number kits. Robbins and the owner of Palmer Paint Co. were elated but soon realized that the number of people bribed to buy the kits was never tracked. This resulted in them not knowing how many people joined the trend and bought the kits out of their own curiosity or passion.

Even though they didn’t keep tabs of those given money by the reps, the news of sold-out paint by number kits spread. This began a paint by number trend and just a few years later in 1954, over 20 million kits were sold to the public.

Not long after the instant craze of painting kits the company went bankrupt. They couldn’t keep up with the demand and competitors creating their own painting kits. 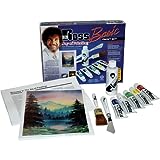 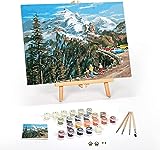 The instant rise of painting kits attracted the attention of artists and critics. Their reaction to the kits was negative and strong.

The art world thought that the painting kits criticized and oversimplified the creative process of painting. Some even thought that kits made people undervalue art since they could create their own painting mindlessly.

Another issue that arose was that some paint by numbers pictures were that of famous paintings. Critics and artists alike thought that by having consumers mass-produce copies of famous pieces undermined them.

Some even thought that the paintings created by the number kits shouldn’t even be considered art at all. This was because painting was not being mass-produced and was not original.

Not all the responses were negative. The painting kits quickly drew the attention of the famous pop-art artist, Andy Warhol. Warhol was already known for his use of repetition by placing different colors on the same print or picture.

After Warhol discovered the kits he became an avid fan. He collected different kits and spoke highly of them.

Even though the art world thought negatively of the kits, Robbins couldn’t have been more proud. Robbins was an artist, but he didn’t feed into what his colleagues were saying about the kits because he achieved his goal of bringing art to the public. He went on to mention that paint by numbers isn’t art itself but it lets those who don’t create art experience it.

Everything You Need to Know About Paint by Number Kits Today 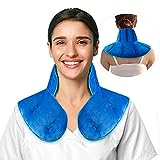 Even though Palmer Paint Co. went out of business due to the demand of their kits, painting by numbers is still as popular as ever. You can walk into any art store or department store and find a variety of kits sitting on a shelf.

There are still collectors and even people who paint to create more personalized gifts. These kits even help people who have trouble expressing themselves find an outlet to do so.

Some may still not consider paint by number kits art, but this doesn’t mean they aren’t therapeutic for the masses. Some people use the kits as a home therapy technique. Many may even use it to unwind after a long day or to take a break from stressful situations.

Today you can even find kits at different levels. There are kits specific for kits and difficult ones so painters can create a real masterpiece.

Final Thoughts – Everything You Need to Know About Paint by Numbers

Now you are a paint by numbers history pro. While learning that paint by numbers was created to sell more paint, to who created the first kit. As well as understanding that Leonardo da Vinci used the same technique to teach his apprentices.

You even know about the rough start the painting by numbers kits had and how the Palmer Painting Co. bounced back by their marketing scheme. We even touched on why paint by numbers are still popular today because they offer a sense of escape for those who paint.

We hope you enjoyed our brief history of paint by number kits. Be sure to check out the rest of our website for more information on painting by numbers and even to purchase your next masterpiece.